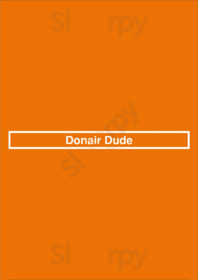 The menu of Donair Dude suggested by Sluurpy users

Erika Golem
+4
People in Canada love donair as a fast food and especially as a late night snack. But first of all; What is a donair? A dish from Turkey, “döner kebab” is the name for seasoned meat that is stacked in the shape of an inverted cone and turned slowly on a vertical rotisserie. The outer layer is sliced into thin shavings as it cooks. This preparation first appeared in Canada in 1973 when it was introduced in Halifax. Known as a “donair,” the Canadian version was born.

Of course when I saw that Donair Dude was voted #1 Best Donair/Kebab 2017 in Westender’s annual poll I wanted to check them out as a potential go-to for when the donair craving strikes. We decided to visit their West End restaurant on a Saturday evening, which I believe is their original location. They first opened their shop during the 2010 Olympics and at the time there weren’t any options for donairs in the city. They now have six locations all over the Vancouver area.

Donair Dude is very much a fast food place, so try not to expect anything more than that. They don’t even have very much seating, save for a bit of counter space. It’s more of a grab ‘n go type of establishment. Although I’m always a fan of a quick counter meal, so sitting atop a stool to eat was absolutely fine with me. The majority of the brightly-lit space is taken up by the ordering counter. There isn’t much for decor or ambiance, however I noted the Latin (for some reason) music playing and the large and interesting archival photographs of Vancouver on the wall.

We approached the counter and a friendly staff member was happy to help us. The first thing that I did was take a look at their drinks cooler. Sometimes these types of places will offer really exciting imported beverages, unfortunately no such luck in this case. They did have Coconut Water though, and I was happy to choose that.

DD is obviously famous for their donair wraps, which they offer enveloped in either a pita or a tortilla. A pita is traditional and typical, while a tortilla is more unexpected and akin to a burrito. Either option comes grilled. If (for some reason) you don’t want a wrap, they do offer different options as well, such as rice plates or meal boxes. They serve a few different appetizers as well. We decided to forgo everything else and went straight for the Grilled Pita Donairs ($8.99). They offer a really great combo called the Dude’s Special (2 pitas & 2 pops for $19.99) which is perfect for two people. Similar to most sandwich shops, you are able to customize your donair with exactly the toppings of your choice. First you choose your Meat; chicken, lamb, beef or Halifax. (Halifax is the original way that donairs were served in Canada, with only beef, tomato, onions, and a special sweet sauce that was invented in Halifax.) I selected lamb, by far my favourite type of donair meat. Next you choose your Spreads which consist of; hummus, garlic spread & spicy red pepper paste. Garlic spread and red pepper paste for me! Then it’s time for Toppings; lettuce, tomatoes, onions, cucumbers, pineapples, jalapeno peppers, black olives, pickles, tabouli. I had them do lettuce, tomato, cucumbers, black olives and pickles. In the future I would probably try adding the tabouli as well, possibly instead of lettuce. And lots of pickles! Lastly, Sauces; donair sauce, Halifax sweet sauce & hot sauce. I went straight donair sauce. As you can see, there are a lot of options and choices to be made! You can also add cheese or double your meat, if you so choose. Once you’ve customized your perfect donair pita they press the whole (massive!) thing into a grill and serve it up to you piping hot. I’m not kidding when I say that this thing is massive. I couldn’t even finish it! Two people could easily share one, if they wanted to. I was really impressed at the wide array of high-quality ingredients used, especially the nice spreads. Most donair shops that I have visited in the past have been a lot more bare-bones.

Chomping into my giant pita, I was pleased immediately by the big bursting flavours. The pita itself was grilled to a nice crunch but still maintained a bit of chew. The savoury shaved lamb donair meat was seasoned perfectly and was ultra flavourful. Like I mentioned, I really loved the spreads because they added even more huge flavour and seemed to be made by using good recipes. All of the vegetables were bright, crisp and fresh, and their pickles were strong and delicious. I love a good Middle Eastern pickle! Personally, I am not a fan of the sweet type of donair sauce, so I was happy to see that various options were offered. Some shops only do the sweet kind and that’s it. Next time I’ll also add cheese and some hot sauce! This was a really, really good donair. Maybe one of the best that I’ve had.

There isn’t much to the shop itself, but the options available at Donair Dude are vast. You can truly create the best (and biggest!) donair that you’ve ever had and it’ll be delicious. The prices are also incredibly reasonable and the value is excellent. True to form, their shops are open until the wee hours of the morning, just when you need them the most! Need a donair in Vancouver? Look no further.
Feb 07, 2018

Katarina Pacheco
+5
Good food, the people were very polite. Very reasonable prices for the amount of food you get. We got there hungry and left full! The falafel plate was very fresh and flavorful!
Dec 14, 2017 Our aggregate rating, “Sluurpometro”, is 86 based on 2546 parameters and reviews

An error has occurred! Please try again in a few minutes