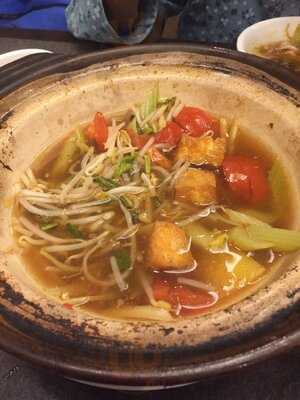 Pa Ool
+3.5
Came for a weekday lunch with a couple co-workers. Trendy interior at odds with the neon DTES exterior. I ordered the large bun bo hue, one co-worker had curry chicken with steamed rice, other had one of the beef soups (also a large). Food came quickly enough. The curry arrived first and smelled wonderful. Co-worker said it tasted quite good, although he wasn't such a fan of the tiny chicken bones he had to pick out.  My bun bo hue was quite good (not as good as my benchmark bun bo hue at Pho Chan: https://www.zomato.com/vancouver/pho-chan-new-westminster). Didn't catch my other co-worker's review of his beef pho, but I think he was also pleased. Service was pleasant and meal was priced okay (about $12.5/person). Maybe not spectacular, but I'd come again when I'm in the neighbourhood.
Feb 11, 2017

ADash OfChili
+3.5
Went to Golden Garden for dinner tonight. We just happened to be in the neighbourhood around dinner time. I've been here a few times for lunch. It's an interesting little establishment. It's one of the nicer looking Vietnamese noodle places in town. Fairly clean both in design and physically. Down those stairs you'll find the Chinese Opera Association (or something like that). The members gather there to listen to Chinese Opera. Sometimes you might hear it upstairs, but usually, the background music in the restaurant drown out the opera music. I definitely recommend trying out their subs and will try to remember to go back for their subs and not their Pho next time.
Aug 25, 2015

Our aggregate rating, “Sluurpometro”, is 73 based on 133 parameters and reviews