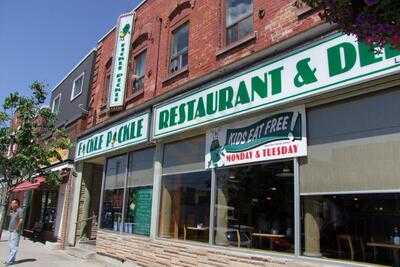 Find the best restaurant in Whitchurch-Stouffville

Lunny
+3.5
2107/01/15On our way back home we stopped at the Fickle Pickle in Stouffville for dinner. It is a medium-sized eatery with a family-style menu, plus some featured Greek food. It was just after 6 pm, and the restaurant was mostly empty, so getting a table was not a problem. We were served by an older gentleman, who seemed to move pretty fast, despite his years. SWMBO chose the Chicken Parmigiana. What arrived was a huge portion of chicken alongside a pretty large portion of spaghetti. When the server brought the plate he smiled and assured her that he would provide a container for any leftovers. She decided then and there to have only half, and to take the rest home. The chicken was reasonably tender, and was smothered in melted mozzarella. The pasta could have bees drained a bit more before plating. She's had worse, and she has had better. I asked the server if the Moussaka was good, and he said "it is always good," so that's what I ordered. It came with Greek Salad and Garlic Bread. The salad and bread portions were large enough for the two of us to share. The moussaka was an average size. It was tasty, and the bechamel was good, but I prefer my eggplant cooked until it is mostly mushy, and for me this was a bit underdone. So the food was average, but the service was very good.
Jan 18, 2017

Andrew Helt
+5
Absolutely delicious food. Have had their take away as well which was excellent. Oh and the manager/owner is an absolute gem! I easily reccomend this place to any friends thinking of finding a good meal for lunch or dinner in the stoufville area.
Nov 18, 2016

Compare the best restaurants near Fickle Pickle Restaurant And Deli

Our aggregate rating, “Sluurpometro”, is 79 based on 136 parameters and reviews